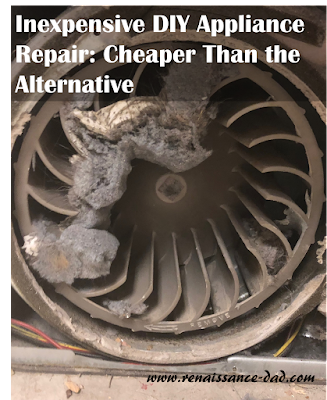 In the past three months we have had four major appliances break. Our refrigerator ice maker, then dishwasher, followed by our microwave, followed by our dryer. I have never considered myself any kind of appliance repair guy. I also tend to have little faith that appliances last very long these days. So with each breakage, my inclination was that it was time to replace each one. However, with a little internet searching, some connecting with great how-to videos, and some inexpensive parts, I was able to save quite a bit of time.

By no means is this meant to be an instructional tutorial. I have already found those for my particular models of appliances. Instead, this is meant to be encouragement that if you have an appliance that breaks down, instead of jumping to the conclusion that I initially made, you might want to troubleshoot a little bit.

Problem - when our ice maker is turned on, the ice bin fills with water and we get a solid lump of ice.

Cause - apparently ice cube trays in automatic ice makers can develop small cracks, causing water to run out and into the bin.

Repair - It took about 10 minutes to remove the old ice maker and about 15 minutes to install the new one.

Cost - $140 for the new ice maker unit from our local appliance parts store.

Savings - About $1860 over buying a new refrigerator, or $200 over the cost of having it professionally repaired.

Problem - the door dropped like a ton of bricks. It was either closed, or careening towards my feet, with nothing slowing its descent.

Cause - the cables holding the door springs to the doors had broken. Apparently these cables are what cause the door to smoothly open and close.

Repair - it took about 25 minutes to wiggle the dishwasher out from its cave enough to get to the springs. Once it was out, replacing the springs and cables was extremely easy and took 5 minutes.

Cost - $21.59 on Amazon for the complete repair kit, and I had it two days after ordering.

Savings - About $780 over buying a new dishwasher, or $150 over the cost of having it repaired by a certified technician.

Problem - the door handle snapped off.

Cause - My wife opened it, and she has some serious cannons due to her daily push ups.

Repair - It took 10 minutes once I figured out how to expose the bottom screw; I had to run a putty knife to open up the housing.

Savings - About $240 over buying a new microwave, or $100 over having it professionally repaired.

Problem - The front panel turned on, but nothing happened.

Cause - Initially unknown, but after watching a great tutorial on AppliancePartsPros, I guessed that it was a broken belt. Once I got the dryer apart, I found that not only was the belt shredded, but the motor pulley was also broken. 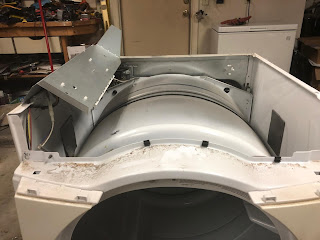 Repair - I didn't want to wait to order the parts, so I visited my local appliance parts store and picked up the two parts. From the time I started taking the dryer apart to the time it was put back in place and tested, I probably spent about two to three hours. I also got to remove significant lint that had been building up in the cabinet over the past 10 years (see picture above), which was a gratification bonus.

Cost - Just under $60 for the belt and the pulley.

Savings - About $650 over buying a new dryer, or $250 over having it professionally repaired.


All in all, with these four appliance repairs, I saved over $3400 over replacing each one, or $700 over calling somebody to come repair them. I came into this season with zero experience in repairing appliances, and each of these repairs, with the exception of the microwave handle, is something that I previously would not have considered doing myself. But with a little bit of research, some great how to videos, and some patience, I found the confidence to knock out each repair.

Now I need to figure out how I get to spend the money that I saved...
Posted by Renaissance Dad at 3:55 PM