Interior Doors: A Small Change with a Big Impact 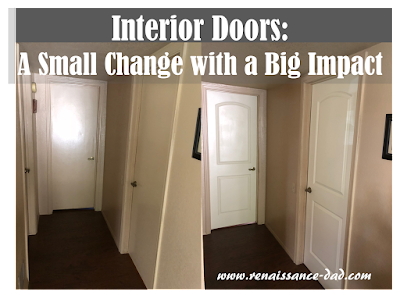 It's funny how small things sometimes tend to bother us for a long time. For the past 19 years, my wife and I have lived in 6 different homes (two of them were very short term), and with the exception
of the 1800's farm house, we always had plain slab doors. The adjective "slab" is fitting, because it makes the door seem plain, boring, and almost offensive. 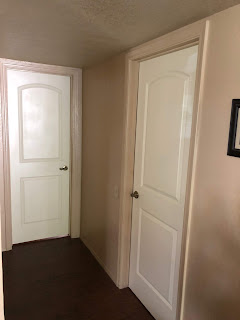 If you have slab doors in your house and you are okay with them, I truly hope that you don't end up despising doors that you otherwise were indifferent to.

We lived in the 1800's farm house during our first two years of marriage and it definitely had issues.  It was in Chicago, the furnace only sometimes worked in the winter, the stairway going to the second story was so narrow that we had to remove a window to get our full size box spring upstairs, and we had a serious mouse infestation every winter. But it had really cute porches, leaded windows with counter-balance pulleys, and solid wood raised panel doors. Oh those doors! They had so much character and added some class to our little house.

In our houses since then, we have continued to dream of raised panel doors. But have you priced them out lately? They run about $50 - $100 each for low end doors. Now, before you read any further, try to guess, just off the top of your head, how many interior doors you have. Now count them up. Were you close? I was shocked when I counted our doors and we have 13.

Thirteen doors! That would run close to or over $1000 doors, and I have plenty of other things that I would like to do with that amount of money. But nonetheless, we have continued to dream about how our house would be transformed with changing out our slabs.

And then an opportunity presented itself. 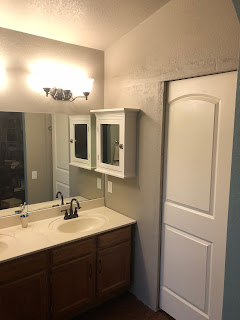 In a conversation with a friend, I discovered that her dad is a manager at a millworks in southern Arizona. Through months of email exchanges, comparisons, and honing in on the right style, we found matching raised panel doors that were mistakes off the line. Mistakes for the millworks meant massive savings for me, and instead of $1000 for our doors, we were able to get new doors for around $7 each.

But there was work to be done.

I had to use a hinge template to cut the hinge shape out of each door (thank you Rosie for walking me through the use of a hinge template, teaching me the difference between a pair [two] and pair and a half [three] of hinges, as well as the best way of hanging a solid door [pair and a half of hinges]). They needed to be painted, and there were adjustments that needed to be made.

The first couple of doors were rough. They had different hinge placements from the existing doors, I had to make sure that the latch and the strike plate were aligned, and I needed to keep the door from hitting the jamb (too high up) or the floor (too low down). By the time I finished the first three, I was a door expert and ready to rock and roll with the next ten.

The total project took several weeks, mainly because painting took so long to set up and clean up that I had to chunk the project into four manageable weekends. The result was everything that we hoped it would be. But, of course, I have some advice. 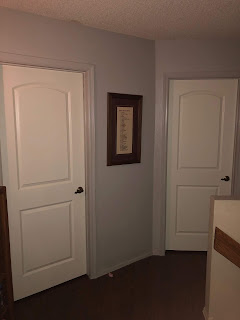 1. We had to decide between hollow core doors (two pieces of hardboard with cardboard ribs - lighter and cheaper, but not as soundproof) and solid core doors (solid wood or filled particle board - heavier, more durable and more soundproof, but more expensive).

2. For the bedrooms, we decided to go with hollow core doors. Initially, this sounds insane, since who wants to hear their kids in their bedrooms. The answer - I do. My wife and I decided that we want to be able to hear what is going on in our kids rooms as they grow up, from the music they listen to, to how late they stay up at night. The thought of them closing themselves in their rooms as teenagers and blocking themselves in (or us out) makes me shudder. Ask me in five years if I still feel this way...

3. For the laundry room, we went with the slightly more expensive solid core door. Who wants to hear their washing machine running, or their dryer clunking? Not this guy.

4. Make sure you know which side your hinges are on, and which way the door opens. We had one door that was backwards. It was a fairly easy fix with some wood putty and our hinge template, but I would have rather been correct in my hinge placement in the first place than have to fix it.

This was a project that had great aesthetic value, took little time (relatively speaking), and, because of the great discount we got, was pretty inexpensive.

Now it's probably time to paint something...
Posted by Renaissance Dad at 8:55 PM