Ten Things I Learned from Building a Dollhouse with My Daughter 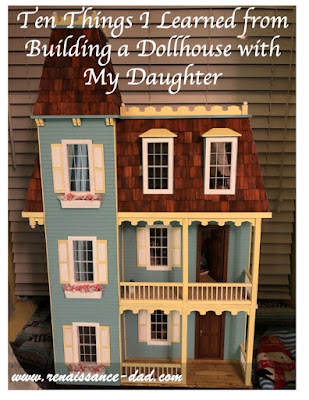 In 2019 my wife and I got our daughter a dollhouse for her ninth birthday. Initially I wanted to completely build a dollhouse from scratch with her, but my wife helped talk me down from that ledge. (She typically only has to ask, "When will you find time to do that?" So much wisdom!) So we opted for a Victorian wooden dollhouse kit (available at Hobby Lobby) -- still pretty DIY in the true Renaissance Dad style, but with pieces already cut out.
When Big A opened the dollhouse, her face lit up. She asked when we could start building it, which we did right away. Started. And it took us one year to build, from start to finish.

I thought I was prepared for this. My friend Stan built a dollhouse with his daughter, and they worked on it for something like 18 years. He and I often talked about the process, so I had mentally prepared for a building project that would be something akin to building an actual house. I wasn't sure if my nine-year-old would feel the same way.

I was pleasantly surprised. My daughter not only loves building things (check out her inspiring project here), but she also loves just spending time with me (Daddy Daughter Date here). The dollhouse is the perfect combination of these two things.

And here are some things that I have learned in the year that it took us to build the doll house. 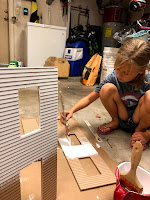 1. This project was my daughter's, and it went the speed that she wanted. If I had done the dollhouse on my own, I would have laser-beamed on each task, working on it evening and weekend until it was done. But it wasn't my own, and the goal was not a completed house. The goal was to spend time with my daughter on a common task.

2. I was a consultant. The house was my daughter's. She picked the colors, the wallpaper, the style. I got to make recommendations, but she could completely ignore me whenever she chose. And she did. But that's okay, since I wanted the house to be hers. Again, I was along for the enjoyable ride, so "fancy" ruled the day no matter how much I preferred "practical" or "classy".

3. This project needed a space. Initially we were working in our guest bedroom. But then guests happened, and the dollhouse moved to the garage. Then summer happened, and it moved inside during some stages. I finally cleared off some table space in the garage, and that is where our "workspace" was. When it was moving around every couple of days, it was a pain. So the dollhouse space was a very necessary component of the project. 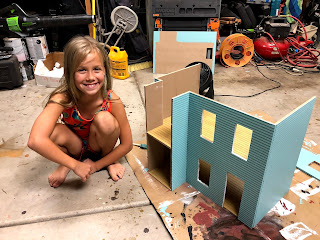