As I mentioned in an previous post, I have not always been successful with gardening. One of my first gardening experiences was with growing watermelons. I built a raised bed, filled it with soil, and grew some amazing watermelons. In fact, my very first Facebook picture was of me holding a 20 pound watermelon. That year, I grew about 10 watermelons of significant size.

The next year, cocky and proud of my previous watermelon experience, I planted watermelons again. I had some amazing vines with baby watermelons on them. One morning my wife came in with the following report. “I have some bad news. I was trimming the watermelon vines back and I accidentally cut off a vine with a watermelon on it. I have some worse news. The watermelons are turning orange.” It turns out that my watermelons were actually volunteer pumpkin vines from some uncomposted seeds. The next year I had a similar experience with volunteer squash. In fact, aside from the first year’s success, I have never been able to grow a watermelon. Frustrating…

This year, I started out some watermelon seedlings. Once they were large enough, I transplanted them into the garden. Here's how that played out:

Round 1, the birds ate the seedlings.

Round 2, the seeds never emerged.

Round 3, feeling like Jack Nicholson in The Shining, I thought I was losing my mind. I went back through the past eight years of gardening to figure out what I was doing wrong. It finally hit me – that first year, I planted watermelons in a foot of pure cow manure. Cow crap made my watermelons grow. And guess what? The watermelons developed a wonderful sweetness in spite of (or because of) the manure they were planted in. But would it work again?

I built a small bed, filled it with six inches of cow manure, put in some seedlings, and protected them from the birds until they were large enough to choke a camel. The result? I currently have one watermelon vine that is ten feet wide by 15 feet long, with dozens of flowers and many small melons (cue junior high sniggering). As Big A, my three-year-old, would say, "Shablam-o!"

Will I end up with lots of watermelons this summer? I’m not sure, but I hope so. Do I have more hope this year than in years past? Absolutely.

I had a similar epiphany when I was looking at a tree in the dirt lot next to my church a few years ago. The field had no irrigation, and subsequently was nothing but dry dirt. However, there was one massive, healthy tree growing in the middle of this field. As I pondered that tree, I had another epiphany as to why the tree was growing. Its roots went down into the septic tank. That tree was alive because it was gleaning life – water and nutrients – from waste water.

It’s interesting that in these two situations the plant growth was possible and sustained from waste. The things that are normally considered to be nothing but useless byproducts are the life of those plants. And here is the part where I get philosophical…

I started thinking about the things that shape our lives. In my experience, the most difficult situations have the biggest impact on who I am, have shaped me and made me stronger. They are not fun at the time, and nobody wishes to go through these difficulties, but on the back end we come out stronger, wiser, and usually more ready to take on life.

I am thankful, after all, that watermelons do not taste like the soil they are planted in.

Here's to a life of sweetness in spite of the manure that happens!
Posted by Renaissance Dad at 7:58 PM No comments: 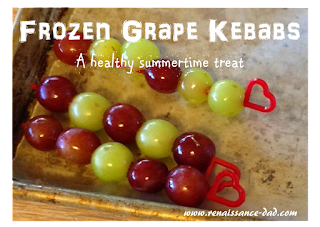 Full disclosure - I cannot take credit for this blog post. I would take on a guest blogger, but my six year old, Big E (as she is known around here), is not quite proficient with typing yet, so I must write for her. But she is the one who came up with this delightful summer treat - Frozen Grape Kebabs. The concept is simple: put grapes on bamboo skewers (or Southwest Airlines drink stirrers (Southwest, if you're reading this, you can sponsor my blog for a ticket to Orange County (i.e. Disneyland) (Disneyland, if you're reading this...)))*, freeze them, and enjoy. They make delightfully refreshing treats for kids and adults alike on hot summer days (110 degrees today in Phoenix. Now who's laughing...). They also make cool stir sticks for fruity summer drinks. We like to use both green and purple grapes. Of course, being an educator, I turn it into a math lesson. Here are some ideas:

1. Patterns - kids as young as three can begin to recognize patterns. Give them a skewer with a pattern, and ask them which grape should go on next.

2. Addition/Subtraction - give older kids two red grapes and three green grapes, and ask them how many total grapes they have.

3. Contrast (Big E's favorite) - have a skewer with four green grapes and one red grape, and ask them to make a contrasting (or opposite) skewer.

Now go on out there and enjoy some frozen grapes, especially if you grow them in your garden.

Posted by Renaissance Dad at 8:45 PM No comments: