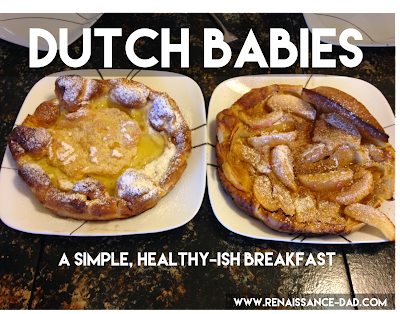 My cousin Taylor recently had her 21st birthday while staying at our house. My wife asked Taylor what would make her birthday special. Without pausing, Taylor said, "Dutch Babies!" I didn't know where a Dutch orphanage was around here and couldn't imagine adding another couple of kids to the mix. My wife then explained that Dutch Babies were a breakfast food, and I was tasked with making them for Taylor on her birthday.


So I began researching how to make Dutch Babies, and I was relieved to find out that there are only about three billion different ways to make them. I also did not have time to do a practice run, so Taylor's birthday would be my first attempt. No sweat! I looked

at several recipes, combined and modified them, and came up with the recipe below. Let me say that Dutch Babies are a new hit in our home. They are easy to make, are a hit with the kids, and have very little sugar in them; in fact, the only sugar is added as a garnish. There are endless possibilities, and after the recipe I will throw out some future additions that I'm planning on trying. So Taylor, thank you for having a birthday and making me learn to make something new.


1) Preheat oven to 450 degrees with a pie plate in the oven (many recipes call for a cast iron skillet. I tried both and found no difference between the skillet and the pie plate, except that the pie plate is much easier to clean)

2) Beat the three eggs for 1-2 minutes until light and fluffy. Add milk, flour, salt, vanilla, cinnamon, and nutmeg, and beat for one additional minute. The batter will be very thin. This is normal. Don't panic.

3) When the oven is preheated, remove the pie plate and melt the butter, making sure to butter the sides as well.
*After the butter is melted, one optional step is to line the
bottom of the pie plate with peeled, sliced apples. This
makes for one delicious Dutch Baby.

4)  After the butter is melted, pour the batter into the pie plate.

5) Put the pie plate in the oven and bake for 18-22 minutes, or until the sides are golden.

6) Remove from pie plate with a spatula, sprinkle with lemon juice and dust with powdered sugar (This is the most "traditional" according to my Aunt Kris, although I haven't seen her credentials. You can really put anything you want on top). To serve, cut or tear into pieces.

Dutch Babies can be served with lemon wedges or slices, maple syrup, apples and cinnamon, lemon curd, apple butter, jam or jelly. The possibilities are endless. I am planning on a bacon and cheddar cheese Dutch Baby for the next round. I'm also thinking about lemon blueberry Dutch Babies.

So many possibilities, so few Saturdays.

Posted by Renaissance Dad at 3:18 PM No comments:

About six years ago my wife and I came to an agreement. She gave me permission to date outside of our marriage. I feel the need to explain that I have been completely faithful to my wife, but I have really enjoyed going on dates with others. It is that much more enjoyable knowing that my wife not only knows about it but also supports it.

You see, I go on dates with my kids. My two girls both enjoy a lot of quality time, while my son is content with just going to Lowe's with me. In fact, Big A asked me one time if we could go on a daddy/daughter date. When I asked her where we should go, she said, "We could get dressed up and go to Trader Joe's!" My dates with the kids are not necessarily about the destination but rather the time that they get to spend one-on-one with their daddy. It's a time for me to ask them about their dreams, their friends, and school, without being interrupted by the other kids. It is also a time for me to show my daughters why daddy is the only one they need to date 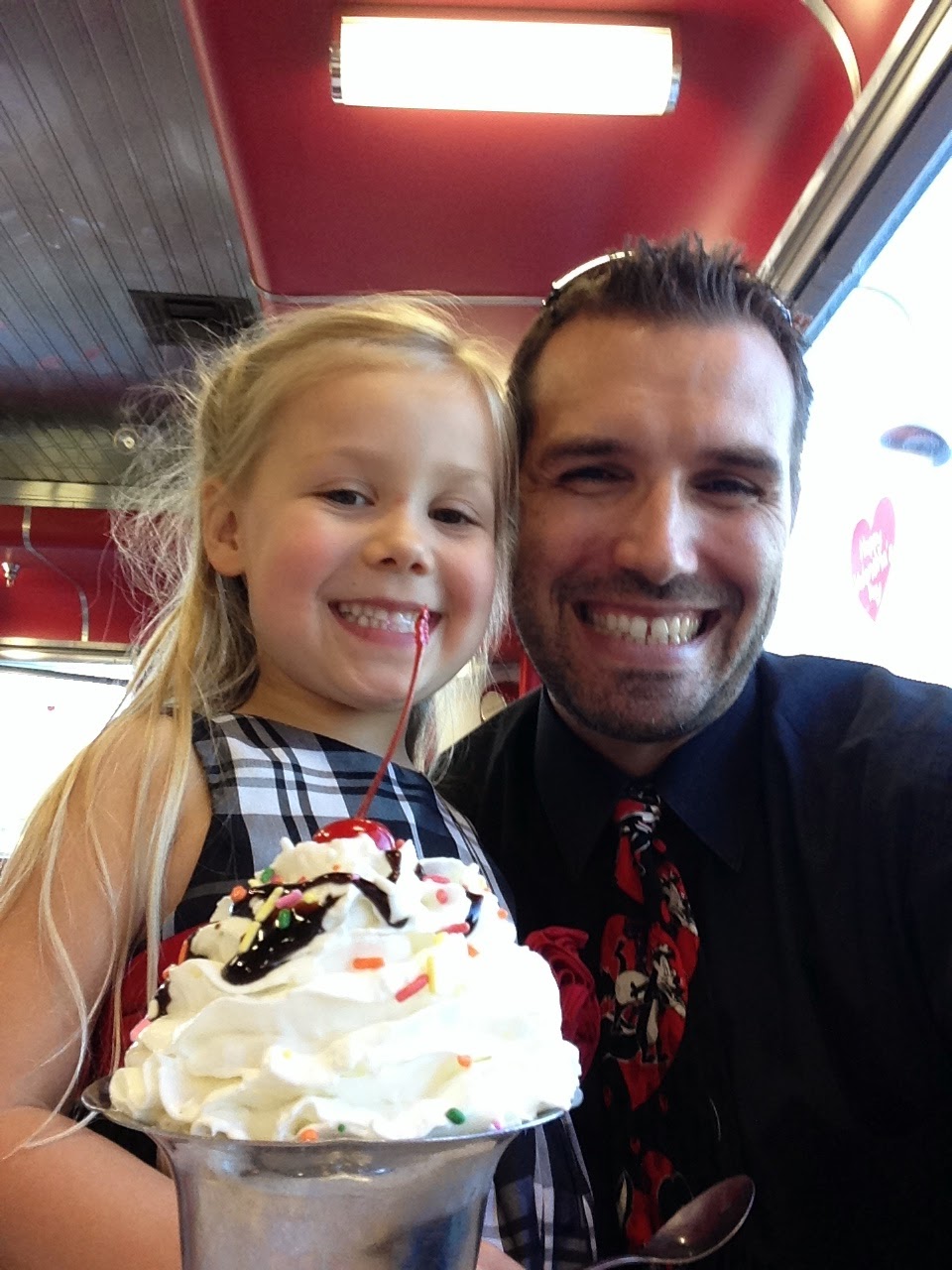 for the next 20 years, which any father can back me up on.

So a couple of weeks ago I asked Big A if she would go on a date with me. She lit up and gave me three criteria - we needed to go out for ice cream, it needed to be a place where we could dance, and we had to wear our fancy clothes. On Monday she set out her outfit for our Friday date, and for the week she could not walk by me without putting her arms around me, kissing me, and telling me that she couldn't wait for our date.

I found a '50s diner close to our house that had ice cream sundaes and a jukebox at each table. This would be just what the two of us needed. So on Friday of that week we each put on our fanciest clothes (I actually just wore a shirt and tie, which I wear to work every day, but it was a tie with hearts on it that Big A picked out for me, so I was set). We drove to the restaurant, we ate our ice cream, we played an old rendition of Daddy's Little Girl on the jukebox, and we had a delightful time. Once that girl gets some ice cream in her she can sure talk! And all she needed from her daddy was for me to listen and be with her. You can bet that I will continue this as she gets older. And of course, as we were leaving the restaurant, we danced on the sidewalk all the way to the car.

I realized that I sometimes think my kids need a lot more than they actually need. I want to woo them with super fun adventures, but they really just want time with their daddy. The total cost of our date was $7 (we left a great tip), we spent a little more than an hour together, but the pure delight and joy of my daughter is something that I will never forget. And with the way she talks about that date, I'm willing to bet that she will never forget that date either.
Posted by Renaissance Dad at 9:18 PM No comments: