Inexpensive Home Comfort Fix: So Easy a Six-Year-Old Can Do It 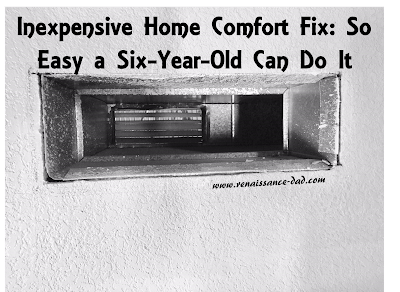 This past week, we had a whole house energy audit. If you haven't heard of these, they are pretty cool. We had ours done through a Rosie-certified contractor (all Arizona homeowners should know who Rosie is). The purpose of a home energy audit is to find out how energy efficient your home is. Here's the process.

First, a big fan is hooked up to the front door. All ducts are tested with a pressure sensor, the AC unit is tested, windows and doors are

Read more »
Posted by Renaissance Dad at 9:35 PM No comments: 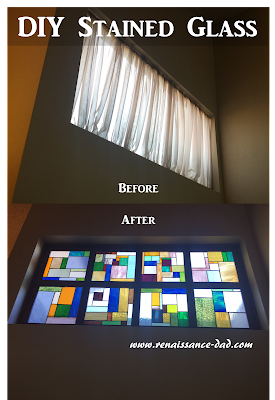 Three years ago I wrote an article about being a real life long learner. The two skills that I had recently learned at that point were milking cows and making stained glass. At that point, I had only made a turtle after one session of stained glass work, but I really enjoyed it. My mom had supplies, a friend had several boxes of glass, and I had a table in the garage that just needed a future project to sit on it. And sit on it the supplies did, for three years.

Then, this past spring, my wife and I were looking at this ugly curtain that covered a south facing window above our sliding glass door. The curtain came with the house, I think it had once been white but was so covered in dust that its color was indescribably filthy, and the window was just screaming for some class. We had talked about doing something with stained glass for that space, but the window is about five feet by two feet, and the turtle that I had previously made was about four inches by three inches. I didn't know if I was ready to

Read more »
Posted by Renaissance Dad at 8:19 PM No comments: