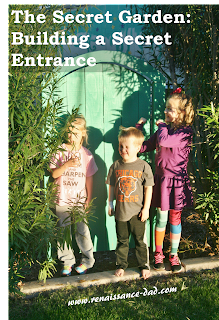 Last summer my kids and I began planning a secret garden (if you missed the first installment of this project, you can read about it here). The plan was to turn a junky, sheltered corner of my yard into a secret garden for my kids. Now I have to admit something. This was partly a selfish plan on my part. My kids love playing outside, and they love playing in the dirt. Digging, making mud pies, throwing dirt clods. As long as dirt is involved, they love it. So I figured if they have a corner of the yard to call their own, they will stop procuring their dirt from the yard and vegetable garden.

So we began with the question: What makes a secret garden a Secret Garden? The answer: a secret entrance.

After determining where the secret entrance would be, I started working on the door. The door frame consists of two four by four posts sunk in concrete, with an arch spanning the top. The arch was made with redwood fence panels, layered, cut in angles, glued, and then shaped into an arch. The gate was also made from redwood fence panels, glued and shaped to match the circumference of the arch.

After all of the gate pieces were cut and assembled, it was time to dig out the oleander bushes. We needed to remove two oleanders to make space for the new door, so we got out the saws, loppers, and shovels, and we went to town. After numerous irrigation repairs (seriously, why would anybody run sprinkler lines directly underneath a row of oleanders?), we had our space.

So here is where thinking ahead really helped me. I didn't know how I was going to do it, but I knew that I wanted to have something in the front of the gate that would undo the latch at the back of the gate. After all, it wouldn't be a secret garden if any old person could find a way in. So, knowing that something would eventually work out, I embedded a u-shaped piece of PVC pipe in the concrete when we set our posts in the ground. The concrete dried, the kids wrote their initials, and the gate was up.

The next step required trial and error. After installing the latch, I had to figure out how to secretly open it from the front. At first I ran a piece of chain from the top of the latch, through the u-shaped piece of PVC, and out to the front of the gate. The chain weighed so much that it would not allow the clasp to close. After various trials using different materials, I finally attached a spring to the thin wire that ran to the front of the gate. This spring allows the wire to release the gate closure to open the gate, but then snaps the closure back in place, ensuring that grownup riffraff  will not wander into the secret childhood space. The wire ran through the PVC and was attached to a small log. By pulling up on the log, the kids can secretly open the gate, and the grownups are none the wiser!

After the gate was finalized, it was time to begin clearing out the space. Big A and I went to town, removing old yard waste, tree debris, a pile of dirt, and some roofing materials.

While the Secret Garden now has its secret entrance, it is still a blank slate. Be watching for the transformation to see what kind of magic my kids begin to make back there.

Posted by Renaissance Dad at 7:37 PM No comments: