The 19 Best YA Fiction Books That Grown Ups Will Love Too: A Summer Reading List 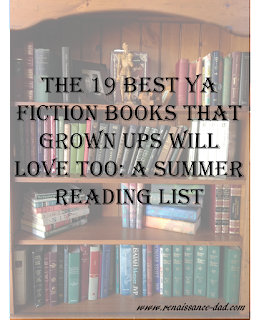 When I was a kid, I loved summers. Summers meant spending hours playing outside, running through the sprinklers, watching for the neighbors to set up their Slip 'n Slide, and staying up all night reading. I developed my love for reading through the summers, and I still remember many of the books I read in my childhood. Summer reading was when I experienced the first book that made me cry (Where the Red Fern Grows. Seriously, has anybody not cried at that book), the first chapter book I read multiple times through (The Great Brain series), and the first book that I remember containing profanity (The Catcher in the Rye. I hid it under my mattress because I didn't know what my parents would think of it). Summer reading developed a passion that I carried into adulthood.

I am still an avid reader. I read every night before going to bed; in fact, I typically cannot fall asleep unless I read for at least a couple of minutes. Many good books have kept me up late in the night, and some books have given me the thrill that comes with an all-nighter without scholastic deadlines. I read The Hunger Game series when it was first published. I pre-ordered the second book, got it after work on a Wednesday the day it came out, and read it cover-to-cover in one sitting, finishing at about four in the morning before going to work the next day. It was worth it.

While my kids love books, they are still in the Good Night, Good Night Construction Site phase. I can't wait to read great adventure stories with them when they're older. So here is my attempt at pointing you towards some great fiction books to enjoy with the Renaissance Dad Seal of Approval. This means that if you read any book on this list that you don't enjoy, I cannot approve of your rationale for not liking it. So here is the list, in no particular order, with a brief description of the book without any spoilers.

1. Robin: Lady of Legend (The Classic Adventures of the Girl Who Became Robin Hood), by R.M. ArceJaeger - There have been many Robin Hood stories, but this one is written with a fantastic twist. Without changing the story much at all, Robin Hood is a woman in hiding. Great adventure story that is Renaissance Dad recommended for junior high and older. It is a book that is on my "re-read this summer" list.

2-4. The Staff and the Sword books (Book 1 - Cast of Stones, Book 2 - The Hero's Lot, Book 3 - A Draw of Kings), by Patrick W. Carr - This is a story about a boy, Errol Stone, who gets pulled into in an adventure to save his kingdom. It is a fast-paced medieval fantasy and is the kind of book in which the end of every chapter leaves me saying, "One more chapter before I stop." Parenthetically, Patrick Carr is a high school math teacher, and this is his first series. Renaissance Dad recommended for junior high and older. I have read it through twice, and I might hit the hat trick this summer.


5-8. The Hangman's Daughter series (Book 1 - The Hangman's Daughter, Book 2 - The Dark Monk, Book 3 - The Beggar King, Book 4 - The Poisoned Pilgrim), by Oliver Pötzsch - This is historical fiction about a hangman in 1600's Germany and his daughter. It is very fast paced, and is probably the most well-known book series on this list, although I have yet to meet anybody who has read any of these books. The author, Oliver Pötzsch, started writing the books as he was looking into his family history and discovered that he had Bavarian hangman roots. I should also mention that the first chapter of the first book makes it seem as this may be a gruesome series, but it is not as dark as it initially seems. Renaissance Dad recommended for high school and older.

9-11. Blood of Kings series (Book 1 - By Darkness Hid, Book 2 - To Darkness Fled, Book 3 - From Darkness Won), by Jill Williamson - This is another medieval fantasy type series following a boy and a girl trying to figure out how to handle their magical abilities in a kingdom that is half covered in darkness. Similar to The Staff and the Sword, this is fast-paced and is difficult to put down between chapters. Renaissance Dad recommended for junior high and older.

12-14. The Safe Lands series (Book 1 - Captives, Book 2 - Outcasts,  Book 3 - Rebels), by Jill Williamson - Set in a futuristic dystopian society, a self-sufficient village is destroyed, several members are taken prisoner into the walled city inside the Safe Lands, and the one young man who was not taken must figure out how to enter and free the people of his village. I now officially read everything that Jill Williamson writes, and you should too! Renaissance Dad recommended for high school and older.


15-16. Children of Occam series (Book 1 - Containment, Book 2 - Equinox), by Christian Cantrell - set in the future, the first settlement on Venus seems to be thriving until a couple conceives and the society realizes that they do not produce enough oxygen for one additional member. The father must scramble and see if he can solve the oxygen problem, but what he discovers will change the society forever. Christian Cantrell is a software developer, and some of the technical writing in this series may seem a bit overwhelming to some, but it is worth it. Warning - Equinox was just released in March, and there is no future release date for what is sure to be the third book in the series. You may want to consider this if you really hate cliffhangers. Renaissance Dad recommended for mature high school and older.

17-19. Lion of War series (Book 1 - Day of War, Book 2 - Covenant of War, Book 3 - Song of War, by Cliff Graham - This is a historical fiction series following King David and the mighty men that fought with him. Graham is very clear that while he attempts to stay true to the biblical accounts of King David, he wrote these stories from a fictional standpoint since there is a lot of detail that is not included in the biblical accounts. Renaissance Dad recommended for junior high (boys) and older. Production on a Lion of War movie is currently underway.

So, Renaissance Dad readers, you now have an extensive reading list for some great literature. While I know that tastes vary from person to person, these are all books that I thoroughly enjoyed, and I have read most of them numerous times.

By the way, Renaissance Dad is now on Facebook. You can visit my Facebook page, like it, and get all of the great Renaissance Dad updates there. I'd also like to hear any feedback that you have about any of these books.

Happy reading!
Posted by Renaissance Dad at 8:11 PM No comments:

I have the most wonderful mom on the planet. And my wife is the reason that I am a Renaissance Dad. In honor of these two phenomenal ladies, I have created an alarmingly delicious drink.

I tried my first Tom Collins this week. I enjoyed it, but decided that I could improve it (sorry Tom Collins, wherever you are). While I initially wanted to call it the Renaissance Dad, I was convinced by my friend Anna that Mother's Day Special is a better name.

Mom and Renaissance Mom (RM), thank you for being so wonderful, and for inspiring me to make booze infused drinks in your honor.


Last year I wrote an article about being a lifelong learner. If you missed it, it would be worth reading. So stop reading now and click here to read it. Then come back and finish this article.

As I ponder being a lifelong learner, I often wonder why it is difficult as an adult to learn new things. Is it because we get stuck in a rut of doing the same thing in the same way all the time? Is it because we are afraid to learn something new? Is it that we're afraid of failing at something when we get used to being successful in the things that we have practiced? Is it because we don't want to miss the new episode of Duck Dynasty? Whatever the reason, I hope that I never get stuck in such a rut that I cease to learn new things. I think of my grandpa, a retired police detective, who over the years has taught himself leather working, metal detecting, photography, and to research genealogy. I want to be like that when I grow up. I want to be the type of person who continues to learn new things well into my 80's. So here is my story about the latest thing I have learned.

Last summer, when I learned to milk cows, my friends Sherri and Bob had some turkeys that they were raising for Thanksgiving. We ended up buying a turkey from them, and in the process I learned how to process a turkey. (In case you didn't know, apparently it is bad form to use the work "butcher" when talking about processing meat. Apparently it's too gruesome of a word. Unless you're a butcher. Then you can butcher away.) So we bought the turkey, my kids got to see it grow big and fat, and then in November I got to process the turkey. So our Thanksgiving bird (26 pounds) was about as fresh as they can get.

Here's the interesting part: my kids were absolutely fascinated by the whole process. They were excited to hear how everything worked. They asked a lot of questions. And they understood the difference between a pet and something that is meant to be eaten. My interest and fascination with the process overflowed onto them, and they became interested. While I was processing the bird on a Sunday, Big E told her Sunday school teacher that I wasn't at church because I was cutting a turkey's head off (not exactly how it happened, but she didn't quite have the play-by-play). I have since processed a second turkey, this one weighing in at 54 pounds (all hormone free; this was just one fat bird)!

I debated as to how many pictures to show in this article. I decided to forgo the pictures that might offend my more tender readers. However, it is a fascinating process of cutting the turkey's neck so it can bleed out, plucking the feathers, and then removing the insides. Participating in the process from start to finish made the Thanksgiving dinner that much more enjoyable. Watching my kids attack the turkey legs, knowing that their daddy provided the food for the table, made me realize that my journey in being a lifelong learner is what many people centuries ago did just to survive.

And it was all worth it when Big E said, "I'm like a sweet little angel when I'm looking at turkey legs, but like a slobbering bulldog when I get to eat them!" Posted by Renaissance Dad at 9:15 PM No comments: