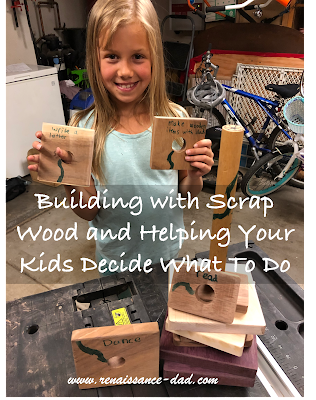 One of the difficult things about living in Arizona is that it is like living on the face of the sun. A short trip to the store means getting third degree burns from the seat belt in the car while the air conditioning functions as a blast furnace. You have to park half a mile away from your destination for a sliver of shade from a scraggly desert tree, and your shoes melt to the asphalt as you walk across the parking lot. The idea of a trip to the store is so disheartening that you decide to skip the whole ordeal. By the end of the summer, when everybody is ready for a reprieve from the heat, we typically have a rise in temperature and it gets even hotter.

A few weeks ago when my kids were going nuts and I was trying to find some way to get them to burn up energy, my wife had a great idea. She recommended that I take them into the garage and let them hammer and nail some scrap wood. My three kids were all excited about going out and pounding nails into boards, my wife was excited about a quiet house, and I was excited about spending time with my kids in a place that somehow manages to be hotter than it is outside.

Two of my kids played with the scraps and pounded nails for a few minutes. My 7 year old made a hammer out of walnut that he sleeps with like a miniature Thor. My 11 year old started to make an easel but the heat quickly got to her. But my 9 year old... She had a vision and created a project like a champ.

And here is her process: 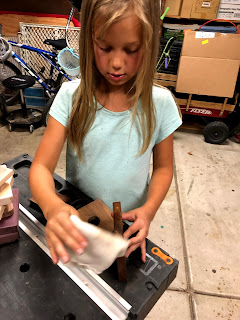 She started by finding several squarish scraps of various woods - walnut, maple, purple heart, and oak were some of them, with a few that I didn't recognize and couldn't remember what they were. She asked me if I could drill a hole in the center of the square, so we talked about how to find the center by marking diagonal lines across the corners. Finally, she found a scrap of a dowel that she attached to another square. So the result was something that looked like a bulky children's toy. You know the one, with plastic multi colored rings that stacked up.

At this point I still had no idea what she was planning. She asked if we could sand the pieces, which we started doing (at this point we had been working for a few hours and we moved this part of the project to the next day - she was focused on her work and had an end product in mind).

Together we sanded and smoothed piece after piece. She then took several of them and disappeared. I kept working, and eventually she returned with the scraps. Each one had something written on it. "Read." "Dance." "Write a letter." "Make wood items with dad." 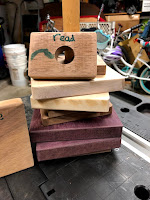 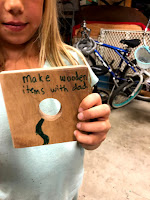 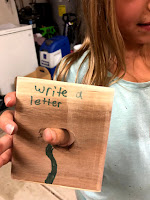 This was her plan. Each night during the summer, she would dump out the blocks and randomly stack them on the dowel, face down, making a tower. During the next day, whenever she felt like she was bored, she would take the top piece and spend time doing what it said. Whatever was left at the end of the day would go on top of the stack the next day, giving her ideas of things to do during her summer break. 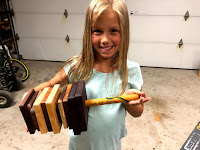 My nine-year-old came up with this, all because she was looking to spend some time with daddy and I had a garage full of scrap wood.

Maybe during the next school break she can help me make a grownup version for myself.

Posted by Renaissance Dad at 8:24 PM