Spring Gardening: Build the Foundation by Preparing the Soil 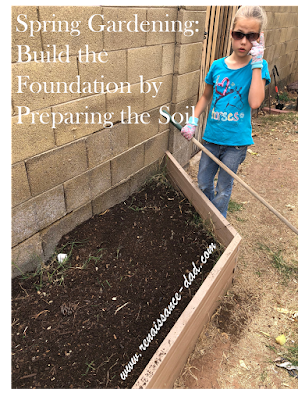 When I lived in Illinois, gardening was so easy. My wife and I lived in an old farmhouse. In the back corner of the yard were the remnants of an ancient tree, long since cut down. The roots were decaying, and the soil was so rich and fertile. We popped in a tomato plant and a jalapeno plant, and that summer we had no shortage of vegetables. We did nothing, and our crop was abundant. We congratulated ourselves on being gardening prodigies.

And then we moved to Arizona. Alkaline soil composed of clay, sand, and the tears of those who once dreamed of gardening. Irrigation that must be applied in the proper amounts at just the right time or we would be the reason the state would move toward complete drought. Tomatoes that would split their skins if the sun hit the fruit for five seconds too long, and would drop from the plant if I didn't sing to them each night. We were not in Kansas (or anywhere in the Midwest) anymore.

To counter the soil difficulties, many Phoenicians build raised garden beds, which I did years ago. We hauled rich soil and filled the beds, generously mixing in manure. For several years we had some great producing plants.

And then last year we got almost nothing. Our five tomato plants produced only a handful of tomatoes. While many gardeners struggled with our weather last summer, which was quite bizarre, I had a feeling that it might be the foundation of my garden - the soil. While I had at one time filled the garden beds with rich soil filled with nutrients, I failed to regularly add nutrients back in. Over time, the plants consumed everything good in the soil. As I was looking back through old pictures, I realized how full our raised beds once were. And over time the soil compacted and leaked into the ground, dropping the top of the bed almost four inches.

It was either time to admit defeat and scrap gardening, or to rebuild the foundation of the garden bed and enrich the soil (spoiler alert: the title of this article gives away what I did).

We started by having a family gardening day. My wife and I and our three kids started by pulling out any dead, dying, or non-summer plants, clearing the way for our new soil. We then added our homegrown compost, some steer manure, and organic mulch. And then the fun part started.

Using my Greenworks 60Volt Cultivator, I tilled all of the good stuff into the soil. I tilled the snot out of that soil. I tilled it within an inch of its life. And, while I used to halfheartedly till the soil with a hard rake, not enjoying the work, this machine made my job so fun. Not only did it aerate the soil and mix in the manure, compost and mulch, but it also tore up and captured most of the grass that had accumulated in the garden beds. I gained several inches just from the way the soil was stirred up.

We spent the rest of the day getting our vegetables in the ground. We planted tomatoes, watermelon, jalapenos, sweet peppers, cucumbers, asparagus, and artichokes. We had such a fun time getting everything into the garden beds, and because we had patiently and properly worked the soil, it was not only easy to get everything into the ground, but (so far) everything is happy, healthy, and growing.

Who knew that preparing the soil was so important to gardening? Probably everybody but me, but now I know as well.

Posted by Renaissance Dad at 9:26 PM