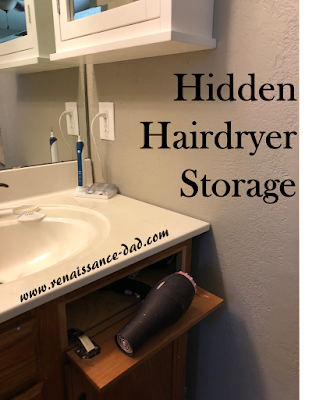 I have been slowly but surely working on our bathroom remodel for so long that I no longer know when I exactly began. The last post I wrote about our bathroom remodel outlined the first several steps, which were completed exactly one year ago. Since then I have chipped away little by little at the bathroom. Lately, I have added two cabinets that I bought at the Rosie on the House auction site, removed our mirrored closet door, and added a pocket door. While those projects have all had their challenges and moved us slightly closer to being done with the bathroom, I am most proud of this project--hidden hairdryer storage--because it brings me daily joy.

The previous owner of our house hardwired a power strip into an electrical box and attached it to the side of our bathroom cabinet (essentially he cut off the plug, stripped the wires, and gave the strip permanent power - not exactly up to building code). This power strip was used by my wife for her hairdryer, but because of the placement of the power strip the hairdryer either lived on the counter or between the vanity and the closet door. The removal of the closet doors and installation of the pocket door forced me to remove the power strip and add an actual electrical outlet in the wall. But the "storage space" for the hairdryer was gone.


I wanted to find a convenient place for the hairdryer to live while keeping it out of the way. Enter the false drawer fronts. These are those pieces of the vanity that look like drawers but don't really do anything. They are not drawers because the bathroom sink is in the way, but, at least for our vanity, there was enough space for a hairdryer.

Here is the life changing plan:

1. Remove the drawer front. Carefully, with a hammer, tap the perimeter of the drawer front to loosen it. Mine was glued and nailed, but with patience I got it out in one piece.

2. Measure the space around the front and side of the cabinet. This will create the sides of the triangle, with the hypotenuse being the third piece that will run next to the sink.  Make sure the hypotenuse will not crash into the sink (thank you, Mrs. Wade, for teaching me everything that I need to know about Geometry, allowing me to use impressive words like hypotenuse and allowing me to actually get correct angles. Twenty-five years later I'm still using the math skills you taught me!).

3. Before installing the frame, use it to trace out a piece of plywood. The plywood should sit right on top of the frame (tip: unless you are using an industrial strength hairdryer like the one from Spaceballs, this shelf will not be holding a lot of weight, so you probably won't need to overbuild it).

4. Figure out how much space you have and the best way to install this. For me, I used two clamps to hold the triangular frame in place. Leaving space so the shelf will be even with the bottom of the opening, and using screws shorter than the combined thickness of the frame and the cabinet face, I screwed the front of the frame into place first. Then I put two short screws into the side of the cabinet to hold the second leg of the frame.

5. Install the plywood shelf. I used three screws through the bottom of the frame up into the shelf, because I had more room to work at that angle. Again, there will not be much weight, so you just need something to hold the shelf in place.

6. Install an electrical outlet (optional). Since I was already doing electrical for the pocket door, I included an outlet right at the front of the drawer opening, allowing the hairdryer to stay plugged in and stay in place. Don't tell my wife, but I actually turned off the power at the breaker for this electrical job. Please just keep this between you and me, or she'll always expect me to work on electrical responsibly.

7. Install the hinges on the no-longer-false drawer front. It took a couple of rounds at Lowe's to get the right hinge, but the ones in the picture worked best (Lowe's item #173167). I had to dry fit everything several times to make sure it fit well, but eventually I screwed them inside the cabinet pieces first, and then screwed on the cabinet front.

8. Slow nod your head with a half smile because you feel like you just stuck it to the man with your cleverness.

When I finished the project, I thought, "Will people think this is a lot of work just to keep a hairdryer hidden? Couldn't you just put the hairdryer in the cabinet?" And then I answered my own question. "Yes, you could just do things the easy way if you're not a Renaissance Dad."

But what fun is doing things the easy way?
Posted by Renaissance Dad at 7:52 PM