Building on to an Existing Bookcase When my family and I moved nine years ago, we had several friends help us with the move. A few of my friends commented on the number of books that we owned, especially when the books had to go up the stairs to the top-of-the-stairs bookcase. That bookcase quickly became overcrowded with additional books, and our bookcase became too small. Then I found a really cool set of bookcases that almost fit the top of the stairs perfectly. They worked for several years (added bonus - our record collection fit perfectly in the bottom cabinet), but then they too became overcrowded with books. I constantly looked at the bookcases and thought, "Man, if they just were about 18 inches wider, we would have enough space." 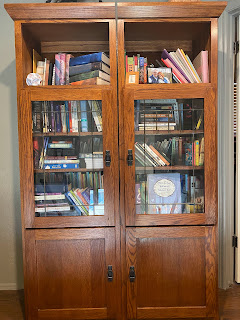 So I recently decided that instead of wishing that they grew (they didn't, no matter how much milk I poured over them), and instead of looking for new bookcases to replace them, I would expand them. My wife expressed her concern that the expansion would not match and would look too much like a "I attempted to match but failed miserably" project. I let her know that it would match and crossed my fingers that I could pull it off. I started by taking one of the doors off and taking it to the hardware store to find a stain that would match. Having learned from experience that I should always test stain to verify the match, I stained a scrap of oak plywood. Not even close. I went to a speciality wood store and found another stain that looked promising. Staining another oak sample, I had a match and the biggest stressor of the project was over. 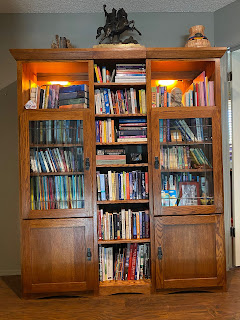 I got a sheet of 3/4" oak plywood and an oak board. I cut the oak plywood to size for all of the shelves. With the oak board, I cut a front veneer to attach to each shelf (so you can't see the plywood layers from the front). I also cut a front kick plate to match the existing bookshelves. Finally, I cut the top trim piece. This was tricky, since it the existing trim has seven different faces. After multiple passes on the table saw, I had a trim piece that was close enough for government work.

I then attached the front veneer to each shelf, and then sanded, stained, and varnished all of the pieces.

To attach the shelves, the top, bottom, and one middle shelf are screwed into the shelves through the existing shelves. The remaining shelves are all attached using black brackets, which I think created a cool look. Finally, the top trim was attached using pocket holes. 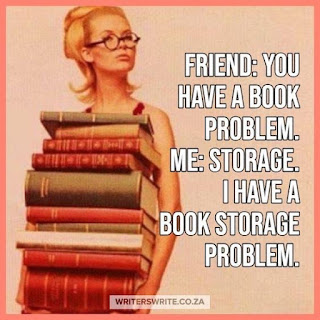 The end result is a book case that looks like it came as a set, giving us more room for our ever-expanding library. Actually, it gave us more room for the books we already had, so one more book and I'll have to find another bookshelf to add on to. True store: when I completed the shelves and filled them up with books, my nine-year-old said, "Dad, where did all of those books come from?" I let him know that the bookshelves were all double stacked and now we can see exactly what books we have.

The only thing left to decide is where to build the next bookcase...

Posted by Renaissance Dad at 10:05 PM

Email ThisBlogThis!Share to TwitterShare to FacebookShare to Pinterest
Labels: DIY