Spicy Oil: Add Some Kick to Your Food 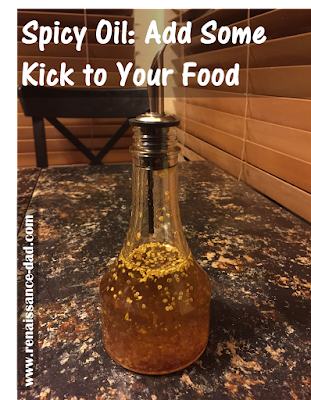 I like spicy food. I REALLY like spicy food. One time in college I entered a jalapeño eating contest. I won first place, eating 33 jalapeños in 2 minutes. While I haven't repeated that experience ever (although I still proudly talk about the t-shirt that I won), I often find that I can't get enough spice in my food.

"What is a pequin?" you may be asking yourself. It is a small pepper that looks like an orange tic tac, and it is 13-40 times hotter than a jalapeño. This little guy packs a punch.

My older brother had a pequin bush in his back yard. I took a clipping from his plant and now have my own pequin bush that is more than six feet tall and six feet wide. I have more spicy orange tic tacs than I can use.


The difficulty with pequins comes in how to consume them. I used to put five or six pequins on a burger, but I would get some bites with no peppers, and some with three or more. Basically, with peppers this small, it is really difficult to evenly disburse the heat and really obvious when you find them (kind of like a fiery Where's Waldo in your mouth). But then I was inspired by a sauce that our Nepalese friends made. Theirs was much more elaborate than mine, but I started experimenting.

At first, I took five or six fresh peppers, smashed them up with a spoon, mixed in a little oil, and had a single serving of spicy oil. This was great, but it only worked when the peppers were fresh. Then I dried some of my peppers by leaving them out in a container for about two weeks. Once they were slightly wrinkled and a little hard, I put them in an open container in the cupboard.

So here's the recipe I landed on. Feel free to adjust as necessary.

1. Using a mortar and pestal, grind up the dried peppers. This is a great activity for kids to help with, but please make sure they wash their hands afterwards. Pepper oils and eyes are not great companions. If you don't have a mortar and pestal, because it's the 21st century, refer to the spoon method mentioned above.

2. Add the dried pepper powder to the storage container.

4. Swirl before using to shake up the pepper pieces.

That's it. This is all it takes to have some Spicy Magic in a Bottle. The great thing about this is that the longer the peppers sit in the oil, the more flavor and spiciness it seems to take on. I now drizzle this over pizza, nachos, pasta, burgers, chicken, coffee, breakfast cereal, and just about anything else I can get my hands on.

This is such a fantastic spicy addition to my diet that I might just have to join a jalapeño eating contest the next time one comes my way. Or possibly a pequin eating contest. Anyone?
Posted by Renaissance Dad at 9:09 PM