DIY Disasters: What to Do When a Project Goes Wrong 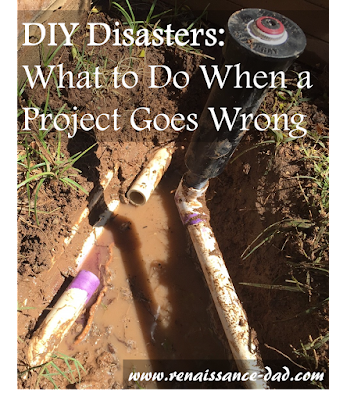 Every year during my Spring Break my wife goes out of town for a work trip. For the week that she is gone, I get to be on full-time daddy duty. I look for fun things to do with my kids, but we also look for home projects to do to surprise mommy when she returns. This year we filled our time with a train park, the zoo, irrigation, electrical work, and painting.

And here's what happened...


I wanted to run an irrigation line for my kids' Secret Garden. Seeing where the water pipe ran into my workshop, I trenched 15 feet for the placement of the sprinkler valves, including two feet under a walkway that I had built. Having laid out everything in preparation for the waterline, I then cut into the water pipe. There was a sizzle, some smoke, a pop, and then a clean cut through the pipe. Apparently when my workshop was built, instead of running the electrical through in-the-ground-approved conduit, they cut corners and used sprinkler PVC. So now I had a cut line that needed to be repaired, no electrical going to my workshop, and the trenching that I had done was useless. The rest of my day was spent repairing the electrical line, so at the end of the day I had accomplished exactly nothing towards the completion of this project.

The next day I shifted gears and did some trenching to replace and re-run sprinklers in my yard. I added five sprinkler heads, so there was quite a bit of trenching that I needed to do for that, but I knew that I was running it from actual water lines, so I had that going for me. I had to stop before completing the project, knowing that I could finish it up the next day.

Early the next morning, I awoke to the sound of rain. I was a little confused, since there was no rain in the forecast, but I listened for about five minutes, just enjoying the sound of the rain. Then, as I gradually woke up, I realized that I wasn't hearing rain. I ran outside, only to witness water shooting up 20 feet in the air. Apparently, as I was trenching for the new sprinkler line, I nicked an existing line for another part of the yard. That small crack created enough pressure to give us our very own Old Faithful in our backyard. I suspended the irrigation, and the next day was spent digging out and repairing the broken irrigation line.

At times like this I ask myself, "Why do I DIY?" I have so many stories of projects that were less than ideal. But for me, those less-than-ideal situations are way overshadowed by the times that things go right. The Secret Garden is something that I can't stop looking at. Not because everything there is perfect and I am an amazing builder. But because my kids love the time they spend there. I can't stop looking at it because of the joy it brings them.

Before you go thinking that I'm some sort of altruistic giver of joy, I need to tell you that I'm not. Unfortunately I don't just do things to bring other people joy. I build and garden and DIY because, when I don't, I feel restless. I'm like Roger Rabbit in the recesses of a bar, trying to stay quiet while Shave and a Haircut is being tapped. When I don't DIY, I start to go crazy.

When mishaps, blunders, mistakes, or catastrophes occur, I become BATMAN. Here's what I do:

Breathe - I take a deep breath, or twelve, and calm myself down. No matter what I've done, it could always be worse (I'm the guy who cut part of his own thumb off once).

Assess the situation - Look at what has happened. See if it is as bad as you think it is. Make sure that it won't get worse (turn off water, electricity, or nuclear power if necessary).

Take a break - Often, after assessing, I need to take a break from what I was doing. I need to clear my head. The opposite would be to go into the situation with guns a-blazing, and that will typically make things worse.

Make a list - Check on the supplies needed for the unexpected repair. There may be something that you already have, or you may need to run to your local hardware store. Take pictures of the problem to make sure that you cover all of your bases.

Ask for help - You may need to turn to the internet, somebody at a hardware store, or a friend for advice or help. The internet is a wonderful resource, but some of the DIY advice out there is a bit shady.

Nod at a job well done - This is after you have tackled the repair, but give yourself the satisfaction of looking at the completed repair/job and relish in the fact that you made it happen.


So while I prefer to have projects completed with no disasters and nothing but pure perfection in the end, I will gladly take the broken water pipes and severed electrical lines over not getting to do a project. I prefer fighting with uneven floors or paint spills over letting my hands be idle. I DIY because that is what is inside of me, and I embrace it. After all, I am BATMAN.

But I would still rather not destroy a hand tool with live electricity in the future.

Posted by Renaissance Dad at 8:56 PM