Broken Irrigation, Tears of Disappointment, and a Chance to Fix Them Both 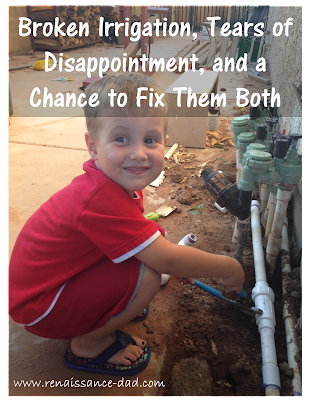 The other day I brought home some plumbing parts and left them on the counter. After dinner, my four-year-old son decided to put the two pieces of PVC together and pound them on the ground, wedging the much needed parts together. I scolded him, snatched the pieces, and went into the garage to try to pull them apart, leaving my son weeping. I was so irritated, but my frustration was more at the plumbing situation and not so much at my son.


You see, this plumbing issue has been ongoing. Before we got the house, some knucklehead installed a sprinkler system that includes seven sprinkler valves all stacked up on top of each other in an eight inch strip of dirt, with the house on one side and the driveway on the other. One line has broken numerous times, and each attempt at a fix is filled with frustration, scraped knuckles, and usually
only a couple of weeks of functioning irrigation before the line slips. Professionals have looked at the setup and cringed. I finally had a plan, the fifth or sixth that I was sure would work, and my four-year-old wedged my hopes between those two pieces of PVC.

But as I was in the garage pulling the pieces apart, I realized that my son didn’t set out to sabotage my repair. He was using his developing engineering skills to put two similar looking objects together the way that made sense to him. He wasn’t trying to stop me; he wanted to help me.
So I did the unthinkable. Throwing his bedtime routine into the wind, I asked little E if he wanted to help daddy fix the irrigation. So the two of us went out. He helped me dig and cut the PVC. I showed him how to fit the pieces together and then clean, prime, and glue the pieces. In 20 minutes, we had our repair drying, waiting to see how we did. But more importantly, we had some great time together, and my son learned a thing or two about PVC repair.

Being a Renaissance Dad isn’t about getting things right every time. It’s not about never losing my cool. And it is certainly not about getting every repair right the first time. Or second time. Or third time. It’s about recognizing mistakes, apologizing, and trying again. And again. And again. It’s about not giving up, even when others are cringing.

By the way, the plumbing repair was a success, and you should have seen little E’s smile when I told him that we got it right!
Posted by Renaissance Dad at 10:28 PM