Bruised Knees, Broken Wheels, and Perseverance: A Journey Toward Riding a Two Wheeler 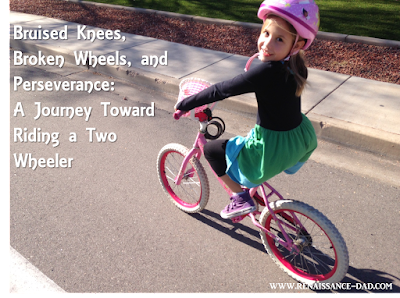 Two years ago my mother-in-law bought my then five-year-old a two wheel bike. Big E hadn't learned to ride a two wheel bike yet, so I took this as the perfect opportunity to get her going. I envisioned taking her to the park, starting her in the short grass, having her ride up and down the field while daddy jogged alongside of her - basically I would have her riding a bike in ten minutes, maybe fifteen tops.

Two skinned knees, torn leggings, and a few tears later, I was carrying the blasted two wheel bike and my daughter home. Once I stopped crying, we tried again the next day. And the next day, and the next day. We were not progressing, so I talked with a friend of mine who worked in a bike shop for years, and he said that kids are ready for two wheels at different times. I figured that maybe Big E wasn't quite ready for two wheels, but this bike didn't have any training wheels. I jumped on Amazon and found some inexpensive, somewhat well rated, aftermarket training wheels.

She rode the tar out of those wheels. They got so bent up that her bike would turn on its own because of the angle of the training wheels. I was so frustrated with the wheels, their cheapness, their poor quality. I was ready to blast them with a review on Amazon. And then I realized something. 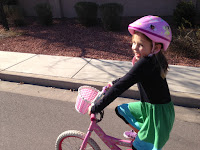 So last November, we decided to take the training wheels off. Big E and I went to the park, and with zero help from Daddy, she started riding laps around the park. No running, no skinned knees, no training wheels. Nothing but huge smiles from Daddy and daughter. And yes, daddy did shed a small tear that day, because I realized that my little girl is growing up. A two wheel bike means independence. But that independence was earned with the perseverance that Big E showed in her refusal to let cheap training wheels slow her down.

Independence earned with perseverance. That's a life lesson that I can definitely hold onto.

Posted by Renaissance Dad at 7:26 PM