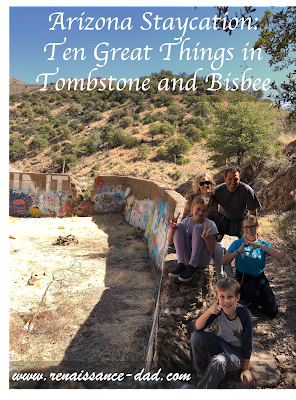 I have a terrible confession to make. I spent half of my childhood in Arizona, and I moved back to Arizona 18 years ago. And in almost 30 years of living in this state, I had never been to Tombstone, Arizona. One of the most famous Arizona towns, made popular by one of the most famous lawmen in U.S. history, in my own backyard, and I had never taken the time to go there.

To make matters worse, Tombstone is my favorite western movie of all time.

So when my wife and I decided that we needed to get around to see more of this state with our kids, it was time for me to brush off the cowboy hat, saddle up the old truck, and take the family down to one of the most famous western towns in the Southwest.

Let me start by saying that we felt the need to prep the kids by showing them a western, and while they're not quite old enough (ages 8, 10, 12) to handle Tombstone, we felt that they could handle Silverado. And for two weeks after that, leading up to the trip, my son (8) wore jeans, boots, a vest, a hat, and his cap gun everywhere. The ten year old donned her hat (cur fight over who had the best cowboy hat), and the tween was just ready to get a break. So we knew it was time to go. 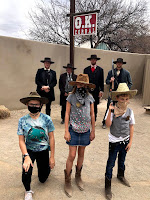 - Tour of the OK Corral, complete with description and reenactment of the gunfight. This was a must, and was really fun. Our tour also came with a replica copy of The Tombstone Epitaph, the newspaper article written the day after the famous gunfight. We decided to skip the other reenactments around and go for the one at the OK Corral, and we enjoyed it.

- Good Enough Mine Tour - I have to admit, we set up this tour because the mine tour in Bisbee was full and we couldn't get in. But this was fantastic. A tour into an old silver mine, moving through the drifts and seeing all the different tunnels used for mining. This 45 minute tour was well worth it. Additionally, they have a moderate length tour (3ish hours) and an advanced tour (7ish hours). I will definitely be returning for one of those!

- OK Cafe - so this little diner was a great stop for lunch between the OK Corral and the mine tour. Food was good, portions were decent, and more importantly, everything was reasonably priced. Definitely a good place to eat when in town.

- Old Time Photo - so it doesn't really matter which one you go to, I'm sure, but we felt the need to have a classic photo in old time garb. Is it cheesy? Yes. Is it touristy? Yes. Does it give you shivers when you see your son dressed up like a bandit, and your daughter holding a six-shooter with a smile on your face so it doubles your resolve to keep them out of a life of crime? Yes. So is it worth it? Yes.

- Wildcat Canyon Hike - we stumbled upon this one. Walk up Brewery Ave. in Old Bisbee, and then just keep walking. The street turns into a dirt road, which turns into an old mining road. Some cool sites along the way, including some old structures that have graffiti art and what appear to be some exploratory mine shafts. We hiked for a couple of miles and didn't get to the end, but the cool finds along the way made this well worth it. The kids managed; we had to bribe them with some ice cream at the end, and I gave more than one shoulder ride to the worn out troopers.

- Lowell - this is a little town that time has forgotten. It is part of Bisbee proper, but it's not. It is one street lined with vintage cars, shops, and history. It feels like a walk back to the '50s. Definitely a cool find. And while you're in Lowell...

- Bisbee Breakfast Club - great restaurant in Lowell with great ambiance. The food was good and the portions were more than generous for the price. I've never seen my kids unable to finish a meal out, until we went to BBC. Score BBC 1, my kids 0.- Greenway Manor - We stayed in this guesthouse that was a former mining executive's house. It's actually a mansion that was completed in the early 1900s. Each room was set up in a classic rock theme, so the grownups got the Beatles room, while the kids got the adjoining Rolling Stones room. It was a really cute guesthouse with plenty of room for the family in a nice, quiet setting. Affordable and comfortable, definitely recommended if you're staying for a few nights.

- Bisbee's Table - Yet another restaurant that we enjoyed, the food was quite fantastic. After a long day of walking around, we were hungry, and the food satisfied. The pizza was excellent, and the kids loved the kids' pasta. Great flatbread appetizer, although I would recommend not being talked into the cannolis, as they were meh. Or maybe I was just too full to enjoy them. Or maybe I just don't like canolis.

- The Town of Bisbee - Okay, so maybe it's a copout to say that one of the great things about Bisbee is Bisbee, but it's true. The town is fantastic. From the alleys lined with artwork, the really cool manhole covers, eclectic old houses, and the endless stairs, to the cool City Park (complete with a stage on which my ten-year-old performed a spontaneous dance routine), this really feels like a town in which you could wander for days and still find something cool. The great thing about these two towns is that we spent three days between the two towns, and we didn't see everything. While there are some things that probably won't need repeating, there was enough unseen that it will be well worth a trip back down in the future.

I'd love to hear from you. Other favorite places to visit in Arizona? Or was there something that I missed in Tombstone or Bisbee? Leave a comment below and let me know! 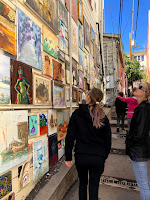 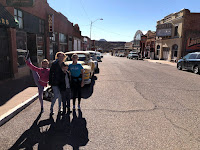 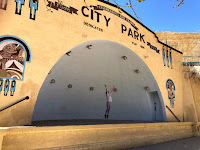 Posted by Renaissance Dad at 6:00 PM