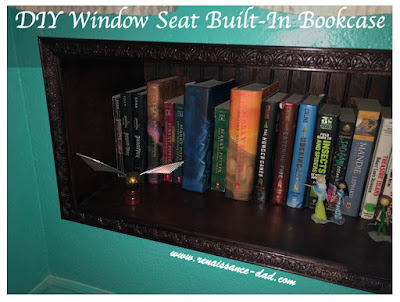 I like built-in furniture. There is just something about a built-in that makes a home feel less cookie-cutter—whether it's a built-in china cabinet, some built-in bookshelves, or some ledges that give a homeowner some extra space. And sometimes I look at a nook, or an odd wall, or some other space, and I think, "Boy, that would be a great space for a (fill in the built-in)."

For years I've been eyeballing the window ledge in my girls' room. My wife and I have had several ideas that we've talked about, from a reading nook to a fort of some sort to a bookshelf. As the years have gone by, and other house projects have taken precedent, I have continued to ruminate on that space. Then, in a brief window of time when I needed a quick weekend project, I seized the opportunity.

My girls have accumulated a substantial quantity of books and tchotchkes ("Would you say they have a plethora?" "Yes, jefe, they have a plethora..."). A little built in bookshelf seemed to be what was needed. This was a moderate-skilled project that I was able to knock out in two weekends, and I was quite happy with the result. So here are the steps. 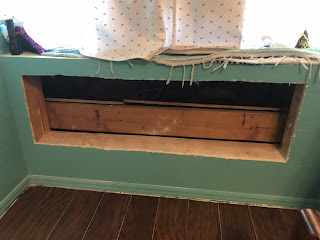 1. Not knowing what was behind the drywall, and not wanting to have a huge repair job in the event that there was some bizarre ductwork or something else in the space, I cut a little rectangle, about the size of an outlet box, into the wall. Cutting the insulation away, I saw what I was hoping for: the blank canvas of empty space!

2. Cutting the remaining drywall between the studs, I ended up with an empty cavity. I removed the vertical studs at the front of the opening, and then removed the remaining insulation. There was also a horizontal 2x6 that was in the way. I cut out the portion that would be in the way of the new bookcase. I figured all of the lumber was just there to decorate the attic space, so it wasn't that important. Just kidding. I made sure that nothing was load bearing before I started cutting, and also made sure that everything would be reinforced before the installation of the bookcase (see #3). 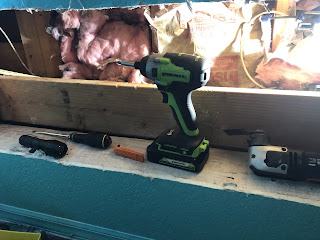 3. To support the top of the ledge, I installed vertical studs where the back of the bookcase would be. I also measured and installed rails for the bottom, and added supports on either end for the 2x6 piece that was removed. I made sure all the electrical was out of the way, and checked that nothing was left unsupported. Note: an impact driver was key, since I didn't have a lot of leverage to drill in the tight space. If you don't have an impact driver, stop reading right now and get one! But seriously, they're great. I love my Greenworks impact driver!

4. Because this space opened to an empty attic space, I insulated the entire area with a roll of insulation. 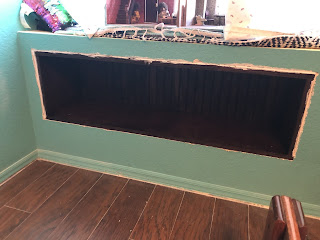 5. This was probably one of the easiest pieces that I have made, since the entire outside would not be visible (except to the occasional spider crawling in the attic space). So using maple plywood and pocket hole joinery on the outside sections, I created a rectangular box 1/2" smaller than the opening on the vertical and horizontal. I added beadboard to the back of it to give it a nice look, and then caulked all of the joints on the outside (still not visible).

6. Once the caulk was dry, I stained the bookcase (Red Mahogany) and varnished it (tung oil). 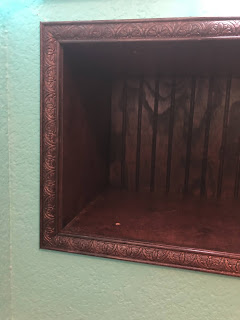 7. I installed the bookcase in the opening with four screws keeping it in place.

8. I caulked all around the seem between the bookcase and the drywall, just to keep out any drafts.

9. Finally, I stained, finished, and installed a decorative boarder.

The girls love it, and it has become a place to display books and treasures, keeping those things off of the floor and desk. The relative ease of this project has caused me to look around the house with an eye for other places where a built-in bookcase may fit, so expect to see more of these projects in the future.

Happy New Year, and here's to a 2021 filled with lots of great home projects! 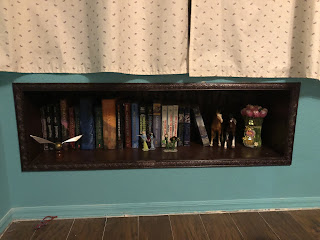 Posted by Renaissance Dad at 3:53 PM

Email ThisBlogThis!Share to TwitterShare to FacebookShare to Pinterest
Labels: DIY