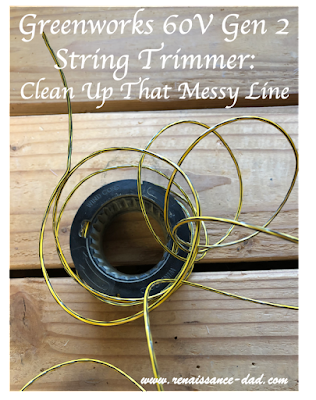 Here's a story that most of us are familiar with. You have spent a few hours doing yard work. All that's left is trimming the edges of the yard and then blowing off the hardscape, and you're ready for a shower and a cold beverage. You start your string trimmer, get a small percentage of the way done, and then your string line runs out. You're faced with the dilemma of spending the time fighting with the trimmer to refill the line. I know I'm not the only one who has filled up a dual spool trimmer line, gotten it tightly wound, and then went to put it on the trimer head, only to have the line jump bounce out, unwind itself, and get tangled.  At that point, I'm thinking that the edge of the yard doesn't look that bad and can be taken care of the next time I mow. My neighbor doesn't say anything, but I see him eyeing those sloppy edges.

That happens to me every. Single. Time. It never fails. When the trimmer string needs replacing, it's at the tail end of my yard work but never as I swipe that last blade of grass.

Enter the Greenworks 60V Gen 2 String Trimmer. Any loyal Renaissance Dad reader
knows that I love Greenworks tools, and every time a new one comes out, I wonder if they have actually improved on the older version. So here is a brief summary of the two, and then I'll go into why I think this is a fantastic tool.

Weight - The first generation of 60V string trimmer weighs 10 pounds (bare tool, no battery), while the new tool weighs 8 pounds. While two pounds may not seem like a lot, after holding that tool for the near 40 minute run time, the two fewer pounds really pays off. Generation 2 has the advantage here.

Attachment capability - The older model had attachment capabilities, meaning you could take the trimmer head off and add other tools, such as a hedge trimmer, blower, or chainsaw. The newer model doesn't transform. To be honest, while I like the idea of that capability, I never actually used it. So, while I was initially disappointed that the new generation was not attachment capable (probably to save weight), since I never used that function it wasn't a real loss for me.

String size - The thickness of the trimmer string may not be something you've thought a lot about. But the thicker the string is, the less likely it is to break, and therefore the less often you have to respool it. The old model has a string capability of .080", which is pretty robust. However, the new model allows you to use string up to .095". That bump puts the line thickness in the commercial grade category, meaning that you'll spend more time enjoying your clean yard and less time replacing the line.

Load N' Go function - This is so amazing that I almost feel giddy about it. As I stated above, restringing a trimmer is one of my least favorite jobs. I almost never get it spot on the first time, the string bounces like Tigger on a sugar high, and it always seems to happen when the end is close, but not close enough. This function allows you to feed the line into the spool, without removing the spool from the tool. You then crank the knob, feeding the line onto the spool. It is one of the easiest things that I have ever done with a lawn tool. It used to take me between five and ten minutes to restring a trimmer, mainly because I was always exhausted and mentally fatigued at the end of a day of mowing. Now, with the Load N' Go function, I can restring my trimmer in about a minute. As God is my witness, I will never respool a trimmer again.

Well done, Greenworks! All that's missing on this guy is a bottle opener!

*I received a trimmer in exchange for an honest review. The opinions here are my own, and I stand by them.

As an added bonus, here are my tips and tricks for restringing the Greenworks 60V Gen 2 Trimmer in under a minute:

- You should put no more than 15 feet of trimmer line in the spool. Instead of trying to remember that, just write it on the trim line package.

- Don't measure out 15 feet of trim line every time. Hold a tape measure and see where 5 feet ends up on your arms. Unless you're Michael Jordan (6'11" wingspan), it should be relatively easy to mark. For me, it's about hand to opposite mid-forearm. So pulling out three "hand-to-wrist" measurements of trim line will give me about 15 feet of line.

- Don't measure your arms every time. Write down the measurement on your trim line package so you have that as well.

Posted by Renaissance Dad at 7:12 PM