Making Money with a Side Hustle 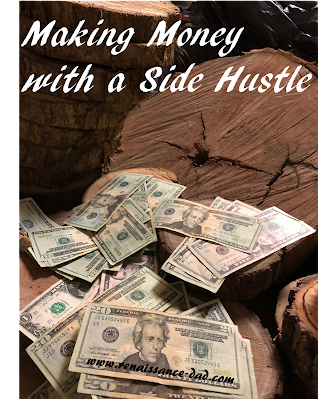 It seems like everybody these days has a side hustle. Makeup or oils, cookies or cleaning products. Most people have something that they do to make money on the side.

My first side hustle was in 7th grade. I went to school one day with some Little Debbie Nutty Bars in my lunch. Somebody offered me a dollar for one of them (sucker!). I took that dollar, bought another box of Nutty Bars, and sold all six packs for a dollar each. My awesome little 12-year-old self had netted a $6 profit in one day, and the entrepreneur in me was born. Over the next several months, I amassed an empire the likes of which Connolly Junior High had never seen. Soda, candy, Little Debbies, and treats were provided by yours truly. I shopped sales, established a clientele, and eventually had to carry two bags to school: one for my school supplies, and one for my store.


Through the years I have had other side hustles, but the Backpack Snack Shop was one of the most profitable.

About a year ago we had a storm blow through our area, and the park behind our house lost several massive trees. At the time I was thinking of stockpiling firewood for our fireplace, so I started bringing logs home from the park. I took my Greenworks electric chainsaw to the park, cut it into pieces (with the city's permission of course) that I could move on my own, and started to pile the wood at the side of my house.

Shortly after that I started noticing that people were selling wood discs on various social media and classified sites. Something sparked in my brain, and I thought, "Gee. I have a whole bunch of wood I got for free at the side of the house. People are buying wood discs for a lot of money. Maybe I should cut some and see what happens."

I took my chainsaw out again, cut discs from the logs until my arms got tired, and listed my wood discs on several sites. By the end of the first day I had received almost 20 messages from people interested in buying them. By the end of the second week I had sold over $100 in wood discs.

For the next several months, I supplied the greater Phoenix area with a steady stream of wood discs. I found out that not everyone who wants wood disks knows anything about actual trees...people asked for perfect circles, four-foot diameter disks, and multiple disks with no color variations. I sold single discs, and spent hours cutting for orders of 60 discs (centerpieces for a quinceanera).

All of the money went into an envelope, and by the end of the year we had saved enough for a trip to Disneyland! The trip wasn't entirely paid for by the side hustle, but it was made possible by contributors like the side hustle foundation!

So what about you? What kind of a side hustle do you have or have you had in the past? I'm interested to see what variety of things you have done to make some extra money. Leave a comment below. Because I just might steal your idea.

Here's to a 2019 filled with free wood and people looking to purchase mass quantities of 1.5" thick wood disks 10"-12" in diameter!


Posted by Renaissance Dad at 7:27 PM

Email ThisBlogThis!Share to TwitterShare to FacebookShare to Pinterest
Labels: Bank