If This Hammer Could Talk 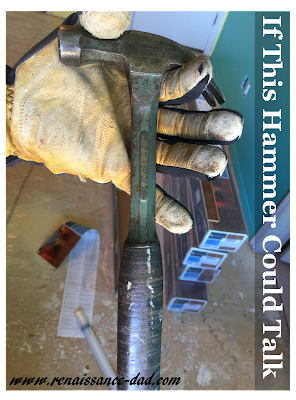 I have been working on a flooring project since last July. Almost every weekend, with the exception of a "sabbatical" during the holidays, some part of the house is a construction zone. All of the furniture is moved. The flooring is pulled up. The sub floor is cleared. New flooring goes in. The edges are caulked. The furniture is moved back. And it all happens with just enough time for me to have a Nerf gun battle with the kids before I go back to work on Monday.

But earlier this month I was hammering the flooring into place, and I got really contemplative. I was using a hammer that had been passed down through what I believe is three generations--an
old Craftsman hammer, with a leather wrapped handle, that belonged to my great grandpa. And then I was awestruck at how much this hammer has seen. This hammer survived a World War. This hammer may have aided in the construction of a house or barn. This hammer has survived frigid Midwest winters, and the infamous 122 degree Arizona summer. This hammer has probably replaced trim, may have installed new house numbers, and has probably driven hundreds of nails to hang pictures.

Boy, if this hammer could only talk...

Then I started to think about the tools that I may pass on (assuming that I own any quality tools that are pass down worthy - this philosophical break that I took may cause me to invest in some heirloom tools). What would my kids think when they inherit my hammer or my wrench or my screwdrivers? Would they endearingly remember the time that we spent working on projects? Or would they see the tools and think of a daddy that spent too much time working on the house and not enough time playing with them? Would they remember me as a patient daddy, or a short-tempered daddy? How will their memories of growing up coincide with their memories of tools and projects and me?

I think that this hammer has done a lot of talking for now. Maybe it's time to put down the hammer and jump into a game of Legos or Polly Pockets, like my dad used to (except for the Polly Pocket part - I only had brothers).

After I hammer in this last floorboard. And maybe just one more...

Posted by Renaissance Dad at 8:03 PM