Termites: A Metaphor for Life 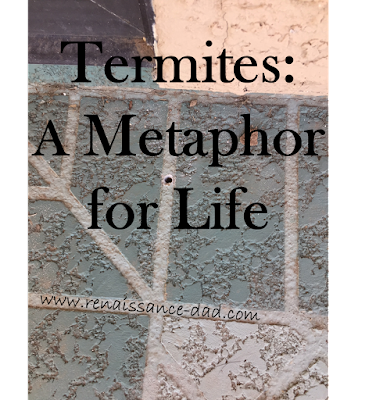 I am a total know-it-all. Well, maybe not a total, but I definitely inherited a great, staunch, German, self-reliant, I can do it myself attitude from somewhere (probably from both sides, with a little sprinkling of marrying into it). This is great for the most part. I like to get things done. I like to research. I like to figure it out. But it recently bit me in the backside.

About a year ago, we were having our bimonthly organic pest control service from Blue Sky Pest Control (Phoenicians, I highly recommend them if you're having pest problems - contact me below or through Facebook and I can get back to you with information) (also, doubly parenthetically, did you know that bimonthly is defined as either two times per month AND every other month? Talk about confusing). Our pest control professional found a termite tube and let us know that we should get an extensive termite inspection. We did, and the inspector, while not finding any other termite tubes, recommended getting our house treated for termites.

And my self-reliant, know-it-all self kicked in. I thought, "Eh, it's just one tube. Probably just an exploratory tube. We're not going to have a termite problem." I listen to Rosie Romero, of Rosie on the House, almost every Saturday. And Rosie says, "There two types of homes in Arizona. Those that have had termites, and those that are going to get them." But somehow that did not sink in, and I ignored the termite problem.

Fast forward to this past August, and our bimonthly (meaning every other month) service technician again found a couple of termite tubes and recommended a termite inspection. This time, the termite inspector found six termite tubes. We went from a small problem to a big problem.

Here was the treatment. We did not have to empty our house of all living things while a giant balloon was inflated around our house with toxic gasses slowly killing the soul of our home. Instead, the technicians from Blue Sky drilled holes in the driveway, patio, and interior of the garage every 16 inches. They then sprayed Termidor HE, which is a termite barrier, into the hole. The Termidor goes under the foundation and spreads out, creating a barrier to keep the termites away.

So now our home had dozens of holes around the foundation. But the holes are then filled, and not just filled, but color matched, so that unless you're looking for them, they cannot be seen. And anybody who looks at my driveway or garage that closely has way too much time on their hands and should probably get a hobby.

My initial termite problem was ignored, and instead of going away, it got worse and worse, mostly unnoticed, until a bigger problem was recognized. Maybe my termite problem is a great metaphor for life. If I had addressed the problem when it was first identified, the cost would not have been as high. However, because I let it go untreated for so long, it not only didn't go away, but it became much worse.

Could the same be said for an apology that goes unspoken? An unkind word that is not forgiven? A government policy that is outdated but ignored? Is this too philosophical for a blog about termites? Well maybe I'm just in a philosophical mood. After all, I just put up a barrier that termites cannot get through, which means that they will be heading to one of my neighbors' houses. So maybe I will need to get that apology ready.


But instead of ending on that, I want to end with something about my kids (this is Renaissance Dad after all). After all of this, Little E, my kindergartner, found a termite tube at school. He was telling me about it one day, and I asked him if he showed it to anybody. His face lit up and he said, "YEAH. I showed all of my friends." I asked him to tell his teacher the next day. And then I got an email from the teacher, thanking me for Little E's termite inspection. She said that she didn't think anybody would have noticed it where it was.