We're Almost There, Even When We're Not: Lessons in Perseverance from a Hike 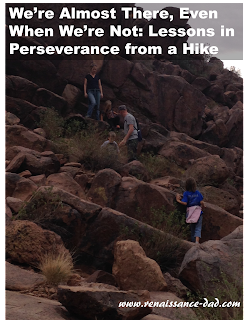 This past weekend my family and I went on a hike. My father-in-law was visiting, and we needed a way to work off our post-Thanksgiving sluggishness. I found a trail that, in all of my years living in Arizona, I had never heard of. It is called the Hieroglyphic Trail in Gold Canyon, Arizona, and the trail ends with many petroglyphs (and I learned something. Hieroglyphs are paintings or drawings on rocks, while petroglyphs are carvings into rocks. But I still don't know why a trail with petroglyphs is named after hieroglyphs). While I did not read anything about the distance of the trail, several hikers had written about this being an easy hike for kids. So we decided to fill up some water bottles, pack up the family truckster, and head to Gold Canyon to see some petroglyphs.

It was a beautiful winter day in Arizona. While most of the country was dealing with snow, we had an overcast 74 degree day with some wind - perfect for hiking. We started off, and the kids ran ahead, excited to see ancient Native American carvings. Since we had three adults and three kids, we divided and conquered, and I powered ahead with my eight-year-old, blazing the trail for the rest of the family.

After 45 minutes, the kids were done. We had gone about a mile, mostly uphill. They hadn't eaten in more than 50 minutes, and in my house that is when the kids begin to think about eating grass, leaves, dirt, or anything else they can get their hands on. I started giving shoulder rides, turning into daddy mule, trying to keep spirits up. I asked somebody walking back towards us how close we were, and she said that we were about halfway there.

Halfway there, running low on snacks, kids wearing out. So when they asked me if we were almost there, I said what every dad in the history of fatherhood has said at some point in his life. "Yes, we are almost there. Let's keep going." We bribed with gum ("If you're positive for 10 minutes you each get a piece of gum."). We joked. We told stories. And the second mile, also uphill, felt like it went so much quicker. 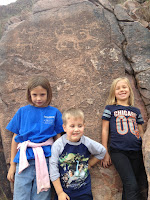 When we got to the end of the two mile hike, the petroglyphs were amazing. There was fascinating detail, which I almost missed due to the constant near heart attacks from kids almost falling down the rocks. We sat and finished off our food while I wondered if my kids were going to resort to cannibalism during the two mile hike back. And we talked about how much easier heading back would be because it was mostly downhill.

During the hike back, I thought about what we would have missed if we had turned back when we were told that we were only halfway there. How would my kids have reacted if I had told them we weren't even close? We still would have had a good hike, but we would have missed out on some really cool history, as well as all of the great family time that we had.

We pushed through on the hike, and we got to see some really cool things. We continually tell our kids that they can do hard things. And the fact that my eight-, six-, and four-year-old all hiked four miles was definitely a really hard thing. I hope that my kids will apply this perseverance to life whenever difficulties present themselves.

So if you're ever in the Phoenix are and you're looking for a great hike, check out the Hieroglyphic Trail. Make sure to pack up plenty of snacks, plenty of water, and brush up on your cadence songs and knock knock jokes, because you'll need all of this on the hike.

And remember, in the grand scheme of things, "we're almost there" can always be used, because any distance can be considered short, depending on what it's compared to.


Posted by Renaissance Dad at 7:59 PM