Grow Your Own Artichokes in Three Easy Steps 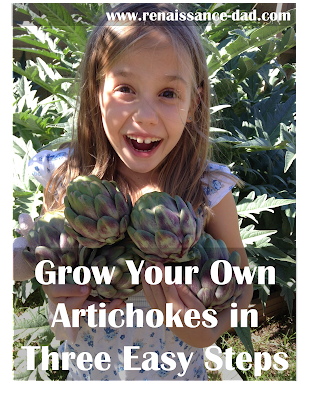 As much as I hate to say it, I am a creature of habit. I like routine. I like normalcy. I like order. As a school principal, I deal with chaos on a daily basis, so I like to settle into my routine when I get home. Right now, you may be picturing Mr. Banks from Mary Poppins singing "The Life I Lead." It's not quite that extreme, and I never get a pipe and glass of sherry at exactly 6:02. But someday maybe...someday. 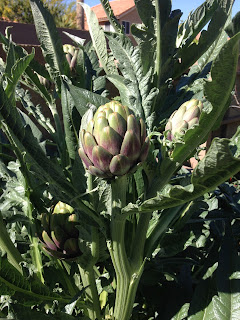 Because I like routine, as I plant my summer garden, it is almost always the same thing. Some variety of cherry tomatoes (last year I went nuts and planted black cherry tomatoes, which were AMAZING), watermelons, strawberries, and some sort of pepper that almost never survives the Arizona summer. My heart wants me to expand what I plant in my garden, but my brain tells me that I have had success with the tomatoes and mild success with the others, so I should keep on that track.

So I think my wife thought I was having a midlife crisis two years ago when I came home from Harper's Nursery with two artichoke plants. I knew nothing about how artichokes grew, but I spontaneously bought them and planted them in two areas of my yard. For those of you unacquainted with artichoke plants, they grow a little like broccoli. Out of the center of the plant one larger artichoke will grow, with several smaller ones growing around that one. Unlike broccoli or other vegetables, artichokes will grow year after year. In fact, one of my artichoke plants has sprouted several smaller plants that are growing in the fringes of my yard, so I carefully mow around those in hopes of gleaning some more artichokes. 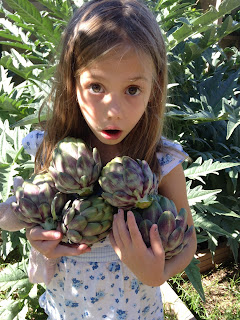 But let me tell you about The Beast. This is the artichoke plant that I put in the ground in a wasted corner of my yard. It was rocky, sandy, and the area has seen the death of two trees. The only reason I put the artichoke there is because I didn't know where else to put it. 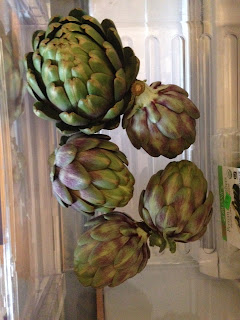 In its first year, The Beast provided us with three decent sized artichokes, and a couple of smaller ones. This year, The Beast has continued to grow. It now stands over six feet tall, has a girth of at least six feet, and has so far provided us with one enormous artichoke (think of a 12-inch softball, and then make it bigger), and 11 normal store-size artichokes. But you're probably asking yourself if they are any good. Surely artichokes that big are dried out, fibrous, disgusting balls of compost waiting to happen. Not true, my friend. It turns out that these home grown artichokes are so much better than the store bought varieties. My kids ravenously eat them, there are never artichoke leftovers, and we can't wait for the next crop after going through all of our artichokes for the year.

Looking back, I really never felt like I had a moment where I thought, "Gee, I feel like my garden is just missing artichokes. I really should plant some." But I am really glad that I had that moment of gardening spontaneity. It has really added to the vegetable variety that we have in the summer, we eat a lot more artichokes now, and I feel quite successful although I do almost nothing to encourage the growth of the plants.

So I promised "Three Easy Steps" to growing artichokes. Here they are:

My experience really was that simple. Who knows what my next spontaneous nursery purchase will produce...
Posted by Renaissance Dad at 8:47 PM

Email ThisBlogThis!Share to TwitterShare to FacebookShare to Pinterest
Labels: Farm