The Power of Yes

I wrote a couple of months ago about getting back into running (if you missed it, you can read the article here). I am happy to say that my dog Kona and I have completed almost 350 miles in the past year, I am on my second pair of shoes, and, well, there are still some mornings when I just don't want to get out of bed early to run. However, during school breaks, when I don't have to get up so early, I enjoy going on a run (it's amazing how motivating it is when the sun is actually out). Yesterday, my seven year old asked if she could ride her bike with me and Kona. Sure! She's on a bike, I don't really have to slow down for her, so I let her ride and we had a lovely time together (of course I realized how much more difficult it is to run and have a conversation with my daughter). This morning, my five year old asked if she could join us and run with me. My initial answer was, "No, daddy is just going to run by himself today."


And then I stopped to think about why the default answer was no. Of course I had a hundred good reasons not to let her run with me. She will slow me down since she's not on a bike. It's 35 degrees outside. I can't run as far. I can't pay attention to one kid on a bike, one kid running, and an 80 pound dog on a leash while I'm trying to breathe. And the list could go on and on. And then I remembered the times I asked my parents for something ridiculous and they said yes. The times my dad went on a 4 mile walk with me so we could watch Monday Night Football. The dog they got me after years of asking for one. The firecrackers they let me buy when we went to Mexico (actually, I don't think they knew about those. Sorry mom and dad, but I sneaked those across the border and didn't get them from my friend Rami like I told you). This list could also go on and on.

I realized that my five year old was just asking to join me in something that I was already doing. Isn't that what I blog about? Isn't that the whole idea behind Renaissance Dad? Didn't I just write about answering yes when the kids ask if they can help (if you missed that one, you can read it here)? I'm not suggesting a blanket yes answer every time a kid asks a question. In hindsight, I'm glad that my parents never allowed me to jump into the pool from the roof of the house. I am saying that I am trying to search for my reason for a no answer to see if it is necessary before I give it. But there I was at 6:30 in the morning, without having had any coffee, trying to decide if my two daughters could go on a run with me. I was processing the best that I could and I couldn't come up with a legitimate reason not to let both come along. So I told them yes.

We bundled up, and with one on a bike, one running, and a dog on a leash, we went on a run. We managed a chilly 1.84 miles (a lot of that was me circling back to run with the kids), we had some good conversations, and I got great smiles from them throughout the run. And when we got home and walked through the door, my five year old said, "Daddy, I really like talking with you." Melt my heart, she could have asked for a pony and gotten one at that point. But I almost missed out on that because I was more interested in an average pace below nine minutes than time with my daughters. But I think that my 11:41 paced run will probably be one of the most memorable of 2015. 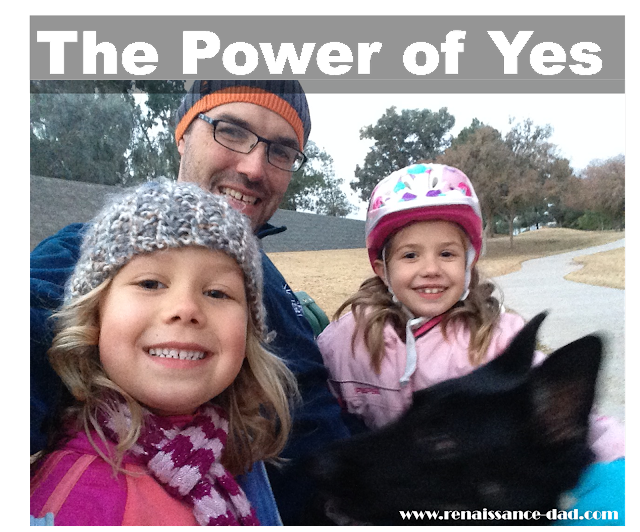 Posted by Renaissance Dad at 8:39 PM