Turning a Closet Into an Office Nook 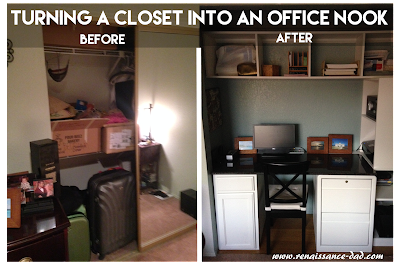 When I became a teacher 13 years ago, one of the things that I loved about summers was the time that I could spend working on house projects. I would begin tearing the house apart a couple of days after summer break began. I think that there was a part of me that missed the energy and intensity that kids bring to a school, and keeping myself busy with power tools was a way to compensate.

And then two things happened, almost simultaneously. I moved into full time administration, which meant that I lost my summers. And my wife and I started having kids, which meant that we lost all of our money. And time. And sanity. The number and intensity of house projects significantly decreased.

But this summer I had a couple of weeks off, and I have been feeling the "House Project Itch" for quite some time. Much like The Ring pulling Frodo towards Mordor, I could not resist the call that my power tools had to do something significant. With the urging and vision of my wife, we decided that it was time to gut one of the closets in our bedroom and turn it into a desk/study space. Now the time off solved the problem of not having summers off, but we still have the kids/money issue. So the challenge was not only to complete the transformation of the closet, but also to do it within a $150 budget. Challenge accepted!

Enter the Habitat for Humanity ReStore. This place is fantastic! Habitat for Humanity is an organization that builds decent, affordable housing for people in need. And their ReStore is like Goodwill but with home goods and building materials. I perused the ReStore looking for inspiration, and I found it. I decided that I would use an oak filing cabinet that I had at home, along with a cabinet from ReStore, as the base of the desk. I found a beautiful piece of granite that wold fit the space perfectly, and some bamboo flooring that would be great underneath all of it. Even better, as I was looking around in their store, I saw that they were having a 50% off sale the following weekend. I decided that I would wait for the sale while I prepped the area.

After removing the rad 1980s gold-framed mirror-doors and pulling out all of our stuff, I removed all of the shelves and brackets. My plan was to keep this as an open study area, so I wanted storage that looked nicer than wire shelves and brackets. I pulled out the carpet, and patched and painted the space (by the way, I bought the paint from Lowe's, which was also having a 50% paint sale. I'm really beginning to think that 50% off and I have a future together). I also cut into a side wall to add an outlet. My canvas was now blank, and I was inspired.

I purchased the materials from ReStore for a total of $45. And yes, this was for an almost new piece of granite that was finished with a decorative edge on the front side, along with a used base cabinet and new bamboo flooring. The cabinet and filing cabinet were not at the same height, so I used my circular saw to cut the bottom off of the base cabinet. I used a level to make sure that they were the same height, and then both pieces got several coats of interior semi-gloss paint.

Next up was the storage cabinets. I purchased two sheets of maple plywood from Lowe's (unfortunately they were not 50% off), and, knowing that my upper cabinets would be 16" deep, I had the guy at Lowe's cut one sheet lengthwise in three pieces, giving me three 16" x 8' shelf pieces. This was a lot easier than me trying to cut the plywood at home on my table saw.

In essence, the storage cabinets that I decided on were all boxes, they were all three sides and some screws. I decided what heights I wanted for everything; for example, I wanted the printer the same height as the desk, so the first two spaces were a total of 31". The printer is 18" wide, so the base cabinets were 20" deep, giving me enough space to accommodate the printer. And then it was merely a matter of building boxes to stack on top of each other, and then painting them the same color as the base cabinets.

I built an upper cabinet that was the width of the space and 18" tall, with the top being a shelf for high storage. Now here is the oops moment. Because the opening had a lip, I couldn't just slide the assembled shelf into place. So it went in at an angle. But because the diagonal of the shelf is longer than the width of the shelf, it doesn't just move into place. So I tried to force it, and ended up with a hole the size of a softball in the painted wall. So now I had some drywall repair to add to the list of things to finish up. I had to disassemble the shelf, get it into place in the opening, and then reassemble it. And here I would like to formally apologize to Mrs. Wade, my high school geometry/trigonometry teacher, for disregarding the basic rules for geometric shapes and causing some extra work for myself.

Upper cabinet in place, I touched up all of the paint areas that were chipped or scratched in installation. Power strips were plugged in, a back shelf was put in place, holes were cut into various cabinets for hidden running of cables and wires, and the desk is complete. Almost. I'm planning on building some doors for the upper cabinets and the top side cabinet, but that will have to wait for now. I will probably include those in a future post, but for now, summer is over, and I am back to work.

Posted by Renaissance Dad at 8:44 PM